The mystery about which artist would join Rage Against the Machine and Travis Scott as headliners at the 2022 Coachella Festival appears to have been solved, now that Swedish House Mafia and the festival have both posted Instagram images or videos breaking the news about the group being booked.

In an Instagram emoticon response to Coachella’s more cryptic post, the Swedish House Mafia account signaled that, yes, it’s their three silhouettes seen walking into the sunset in a photo the festival posted. It didn’t hurt, as an immediate hint, that Swedish House Mafia’s signature black circle logo was embedded in the Coachella Fest’s original caption. 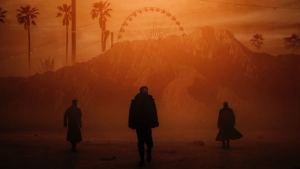 Things got more explicit in Swedish House Mafia’s own subsequent IG post, with a 20-second video of a sewing machine hard at work ending in the sight of a hoodie bearing both the SHM and Coachella names.

The group will presumably be on the lineup for both weekends of Coachella 2022, scheduled for April 15-17 and 22-24. The third time is looking to be the charm for the festival resuming, after pandemic-related cancellations in 2020 and 2021.

The news is especially welcome to fans as the group is known for taking epic breaks. The trio took a five-year hiatus before reuniting at Ultra Music Festival in 2018; a 2019 tour followed. The group was known to be returning to the live scene with a December 2021 appearance at the Audacy Beach Festival in Florida, with a 2022 tour to follow, but dates for that haven’t yet been revealed.

SHM recently released its first new music in eight years, the singles “It Gets Better” and “Lifetime” (the latter with featured appearances from Ty Dolla Sign and 070 Shake). A third, “Moth to a Flame,” featuring the Weeknd, is on the way (in fact, it’s coming this week, according to a Tuesday post from the band), as is a full album.

RATM and Scott are headliner holdovers from the lineup that was originally revealed for the nixed 2020 festival, but the third part of that triad, Frank Ocean, told the festival he couldn’t make it in 2022 and would take a rain check to headline in 2023.